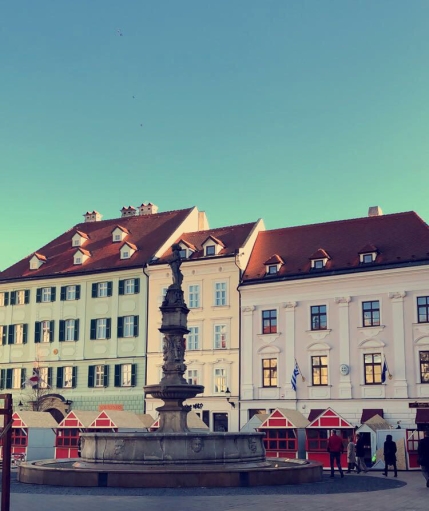 When people think of Europe, they think of the major countries and their popular cities. While visiting the main tourist attractions that Europe has to offer is sure to be a treat, don’t lose out on the possibilities and charm that the lesser known cities and towns have to offer.

During one of  our multi-country trips we ventured out to Slovakia’s capital; Bratislava. An hour’s drive from Vienna, we embarked on a day tour of this quaint and charming city. We were looking forward to seeing what this capital had to offer.

After arriving a little over an hour ahead of our scheduled tour, we walked towards Hviezdoslavovo Namestie. A tree-lined plaza with restaurants, bars and embassies; this was the perfect location to begin our tour.

We decided to have a quick breakfast before meeting our tour guide. We headed to one of the plethora of restaurants in the vicinity and thanks to doing this tour in the middle of the week and the lack of clientele, we were seated pretty quickly. The dishes were light and fresh, the ambiance was warm and thanks to our table being next to large windows, we were able to watch as people came and went through the streets. 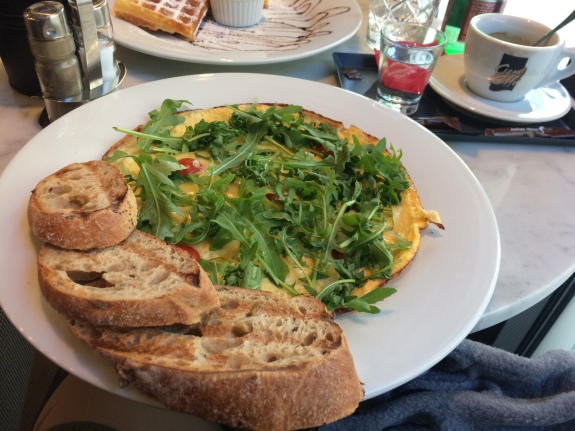 Once we finished our meal, we walked towards a fountain in the center of the plaza. Due to the chilly temperatures, the fountain wasn’t running any water. We were anxious to begin the tour so we could learn about the city and also keep moving. The temperature and wind were giving us major chills. Despite the beautiful, clear and sunny sky, and all the layers of clothes we had on, there was no warmth to be felt outside.

Luckily, we found our tour guide fairly quickly and began walking down the plaza. Our first stop was in front of the embassies that lined the plaza. She pointed out that the American embassy was the only one with a fence around it. It was an interesting sight, seeing all of the flags representing the different countries that had an embassy in this small capital.

We continued our walk around the plaza and reached a couple of statues and learned a little bit about each. The next stop was at the Holocaust memorial that was standing where a synagogue used to be before WWII ravaged it. The history of this city and the different allegiances it held throughout the decades was evident in the different types of memorials around the city and different types of architecture. 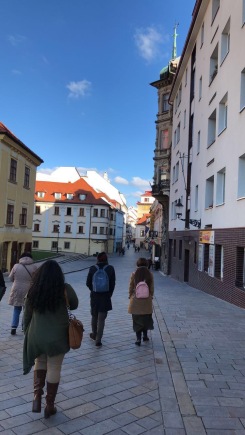 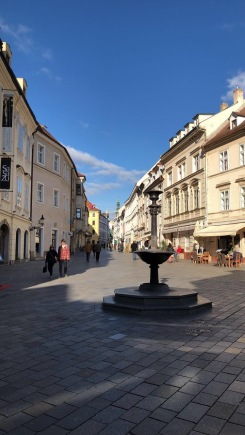 As tourists wandered through the welcoming streets of Bratislava, we noticed that the city seemed to be getting ready for something big. Quickly, we realized that they were preparing for the famous Christmas markets that pop up every year in Europe and attract millions of visitors.

Unfortunately for us, the markets wouldn’t be completed that day. However, as we were about to complete our walking tour, we got pretty good glimpses of how the market would look.

Our walking tour ended with a lunch that was included in the tour at one of the popular restaurants in the area. We enjoyed a nice light lunch and headed out to walk the streets of Bratislava on our own.

We wandered over to the main area where the Christmas market was going to be and visited several of the shops that lined the streets. You could feel the Christmas spirit in the air as we walked around and encountered a giant Christmas tree. We had never seen one so big! Due to the size, taking photos was quite a task. But it was definitely an enjoyable one. 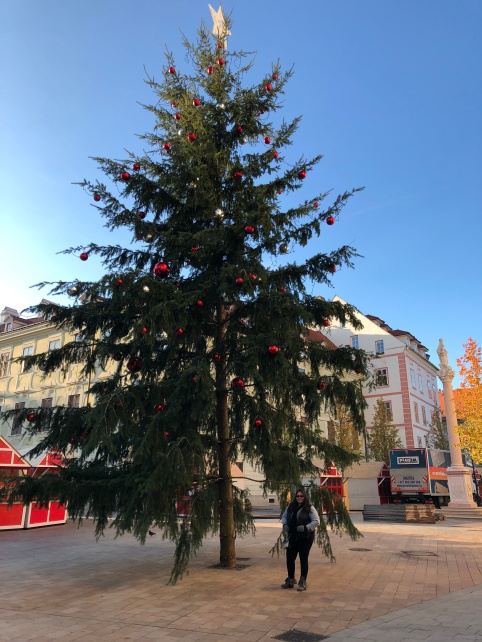 We continued to explore the city along the Danube River and admired the different buildings that had been around for so many years. We could see the modern Most SNP bridge and the many boats that were on the river. If the temperature hadn’t been so chilly, we could’ve left back to Vienna through one of the river cruises – it was an option on the tour, but was not available during that time of year.

After checking out the historic Slovak National Theater, we decided to end our tour at a café that faced the Danube River and enjoy the amazing hot wine that had become our favorite drink during this visit to Europe. The fact that it helped keep us warm was a welcome bonus. Also, it was a very cheap drink to have as well, cannot recommend it enough!

We enjoyed a couple of hours at the café and talked about our day. It was surreal to be in this city that not so long ago we had no idea existed. Our adventure had paid off and we were very fortunate to enjoy such a lovely city that is very underrated. It was a reminder that there is so much more out there in the world than just the famous hot spots everyone wants to visit.

We recommend that you check this city out before it also becomes overrun with tourists. We’ll definitely always cherish the day we spent there and the ease with which we were able to enjoy so much of the city without crazy large crowds. And if you go during the late fall months, make sure to enjoy some hot wine just as we did as the sun set over our day in Bratislava. 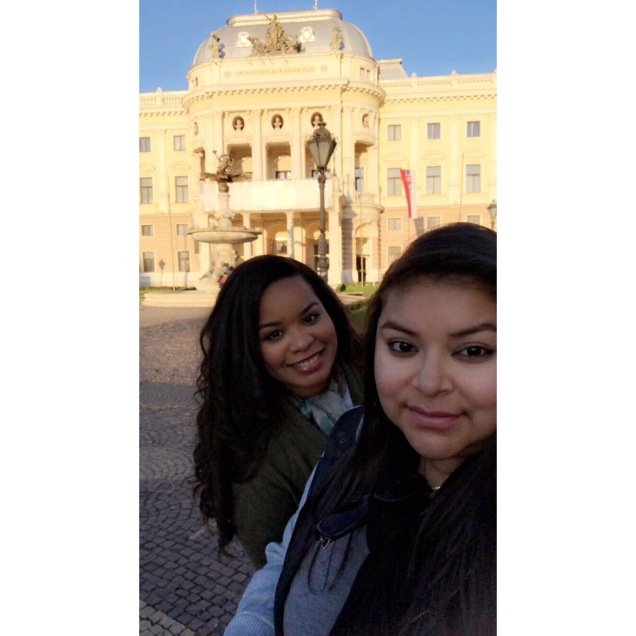